What is the Kibble Balance?

What is the Kibble balance? 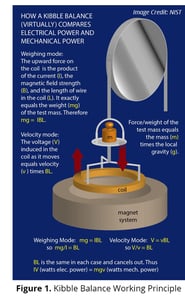 The Kibble balance is an electromechanical mass measuring instrument that was first conceptualized by Bryan Kibble in 1975. The instrument was originally called ‘Watt balance’ because it measures both current and voltage in the coil, the product of which is expressed in watts, the SI unit of power. That product equals the mechanical power of the test mass in motion. Like any balance, it is designed to equalize one force with another.

How does it work? 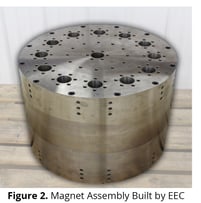 Current and voltage are measured in two separate modes of operation: Weighing and Velocity (Fig. 1). In weighing or force mode, the weight of a test mass is exactly balanced by a force produced when an electrical current is run through a coil of wire placed in a magnetic field. The magnetic field is provided by an EEC-made permanent magnet assembly (Fig. 2). In Velocity or Calibration mode, after removing the test mass and applied current, the induced voltage is measured while moving the coil in the magnetic field at a carefully controlled constant velocity. With a formula m = IV/gv (all measurable, see Fig. 1), the Kibble balance was capable to calculate the Planck constant h within 13 parts per billion in 2017, which was accurate enough to assist with the 2019 redefinition of the kilogram.

Why is it important? 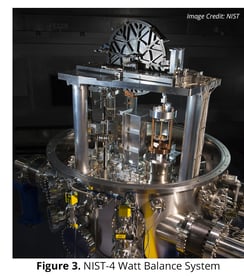 The NIST-4 (Fig. 3) uses an EEC-built, 1,000-kg permanent magnet assembly which produces a 0.55 Tesla magnetic field. The Kibble balance is used to define the kilogram using physics and mathematics. This method replaces the world’s dependency on a platinum-iridium artifact that has been the kilogram standard recognized by the international community for the past 130 years.

When and where is it used?

On November 16, 2018, the Kibble balance was officially approved to satisfy the exact measurement requirements that had to be met in order to redefine the kilogram. Now the NIST-4 system is officially used in the US for the national prototype of the kilogram.