What is rare earth? 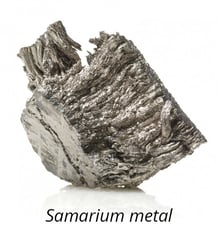 Rare earth metals, despite its name, are not rare (with the exception of the radioactive promethium) and they are not “earth”. In fact they are relatively plentiful in the Earth's crust. The most abundant rare earth metals are cerium, yttrium, lanthanum and neodymium. However, these metals are very difficult to mine because the concentrations are normally too low for economical extraction.